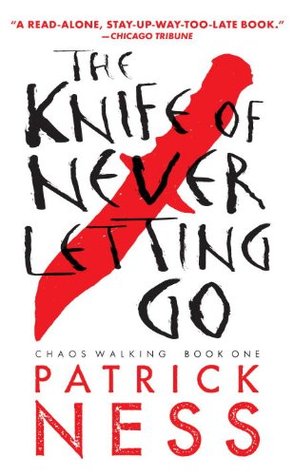 Todd Hewitt is the only boy in a town of men. Ever since the settlers were infected with the Noise germ, Todd can hear everything the men think, and they hear everything he thinks. Todd is just a month away from becoming a man, but in the midst of the cacophony, he knows that the town is hiding something from him — something so awful Todd is forced to flee with only his dog, whose simple, loyal voice he hears too. With hostile men from the town in pursuit, the two stumble upon a strange and eerily silent creature: a girl. Who is she? Why wasn’t she killed by the germ like all the females on New World? Propelled by Todd’s gritty narration, readers are in for a white-knuckle journey in which a boy on the cusp of manhood must unlearn everything he knows in order to figure out who he truly is

I went into this book with 0 expectations. I picked it up at a book swap and only because my Book Bestie had a copy and we agreed to buddy read it, so I didn’t even really read the synopsis.

I must admit it did take me about 100 pages to get into the book and I only read about 15 pages before I decided to switch to audio. The reason for that mainly being that I’ve only been back at work for 2 week and I just could not read on a 7am train like normal.

However it was the best decision I could have made because the narrator was fantastic! Although I think I may want this trilogy on my shelf I do think I will continue to listen to them.

“Knowledge is dangerous and men lie and the world changes, whether I want it to or not.”

I am so glad this story was only told through Todd and I guess to an extent everyone elses noise, he was a really interesting character and it was amazing to watch him mature. When I first started the book and started to really get into it I couldn’t stop thinking about all the younger cousins I could gift my copy to. Todd was so relatable for his age group, that thirst to become a man already, never being a part of the big conversations and his struggle with that and also some of his initial reactions to things. but boy did he grow and mature, I honestly cannot wait to see how much more he develops in the next 2 books.

Although I thought at first that Manchee and his constant “Poo, Todd” would end up driving me nuts he actually became my favourite character. I was kind of disappointed that we don’t know what bread he is (although I may have missed a description) but just from his character I am going with Golden Retriever. Loyal to a fault, a bit goofy and easily distracted. I have already told my Boyfriend that when we get our own place and our own dog he will be named Manchee, I am sure he will be best friends with our cat Church when we get him too.

To keep everything no-spoilery as possible I would say The Knife of Never Letting Go explores what it really means to be courageous and the lengths we go to to protect our own.

“But a knife ain’t just a thing, is it? It’s a choice, it’s something you do. A knife says yes or no, cut or not, die or don’t. A knife takes a decision out of your hand and puts it in the world and it never goes back again. ”

It looks at the root of evil and what happens when people abuse the power they are given and the extreme measures they take to keep that power when they are threatened. On top of all that it is an adventure packed SciFi novel with some really cleaver ideas. BUT the most important thing it makes you think about is what you would do in a world where everyone can hear your thoughts, seriously what in the world would you do?

This review is super vague and I’ve done that on purpose because I actually think the less you know the easier it will be to slip into the story. If you like ScifI, if you like adventure, if you like a good coming of age novel, if you are whiling to let this book take over your life for a little bit and give YOU ALL THE FEELS then really this is the book for you! 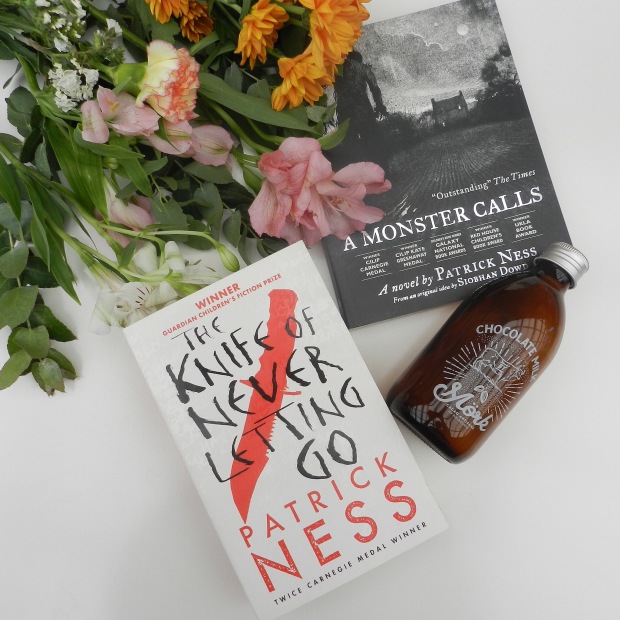 11 thoughts on “Review: The Knife of Never Letting Go by Patrick Ness”

Quick Summary of the Review Guide